Apart from the first few days spent in a berth at Opua Marina, in the 2 weeks plus since we arrived in New Zealand, we have been familiarizing ourselves with the area around the Bay of Islands.

Being the first contingency of yachts to arrive in New Zealand for the cyclone season, we have met few overseas yachts so far and enjoyed quiet anchorages where we are often the only boat moored. It has given us a good opportunity to explore at our leisure, having been told by locals that by New Year we could find ourselves surrounded by a 100 other boats anchored in many of the popular little bays during the summer holiday period.

Stars End 2 the only yacht anchored in a pristine bay

We have been told that unlike Brisbane and the Pacific, where we have been accustomed to predominant trade winds, here, in the variable latitudes of New Zealand, they experience frontal systems which sweep across the Tasman Sea, particularly during Spring. They are proceeded by strong northerly winds which increases in speed as the front comes through, and then veer north westerly bringing heavy rain. As the front passes, the wind turns a chilly south westerly but unless another front is looming, you can generally then depend upon a few consistent days of more moderate weather before the next change.

View across Bay of Islands 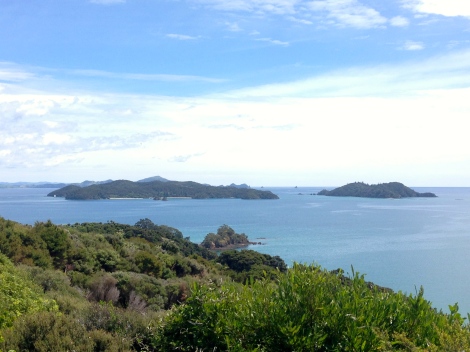 Looking across at Roberton Island

The NZ Bureau of Meteorology have impressed us with their accurate predictions of this consistent weather pattern and whilst there are copious choices of anchorages, particularly during spring, the wind direction and strength can change several times a day, so we need to consider our choices carefully, as it appears normal to have winds gusting 30 to 40 knots plus.

Frank & I have been surprised at how cold the temperature has been here- thankfully, the sun has been fairly consistent, but the strong winds, particularly those southerlies that blow all the way from Antarctica, have prompted us to raid the op shops for warmer clothing, pull out our doona & all our blankets and I have even resorted to using my emergency hot water bottle on colder nights. For once, I am glad the yacht is not large as it only requires us leaving on our stove top toaster for a few minutes to heat up the cabin.
I have not bothered to restart the freezer, instead separating the bottom of the fridge with a partition, to use as an ice box, and the cold water temperature (about 14-16 degrees) has allowed the fridge to cycle efficiently, and be mainly serviced by the solar panels.

The supermarkets have been most welcome after so long in the Pacific with their restricted choices. It has been exciting re introducing all those long forgotten foods back into our diets, more particularly the huge selection of meat and wonderful choice of fresh produce that we had grown unaccustomed to finding in Fiji.
It has also been a nostalgic from my childhood memories to see the strong English influence in the heritage buildings & rambling country gardens with their budding blossoms on the fruit trees and colorful banks of spring bulbs.

Sightseeing at the Haruru Waterfalls at Piahia

Frank & I have been totally spoiled by having our good friends Marion & Colin living nearby. They have made us so welcome, entertained us numerous times, helped sourcing items, shown us around, and we have even already enjoyed our first party at their new Russell home.

We have been introduced to a number of their friends, many of whom also work as caretakers of multi million dollar private properties around this area. Less than a week after arriving here, we enjoyed an indulgent weekend house sitting for their friends who are unable to leave their property unattended.
So whilst they took off for a weekend getaway, Frank & I languished in their caretaker’s cottage set among some of the most magnificent grounds with opulent mansion that we have ever seen. After 6 months on board Stars End 2, we thoroughly enjoyed the simple pleasures of a home- constant hot running water, a washing machine, and the bonus of a log fire & stunning hot spa plus unlimited WiFi. Unfortunately my beloved camera is irrevocably broken, but even if it were not, I am afraid I would be unable to share photos with you, for privacy clauses in their contract, but below is an general view of Stars End 2 moored in the bay . (Until I replace my camera back in Australia, I will only be able to post pictures from my iPhone.) 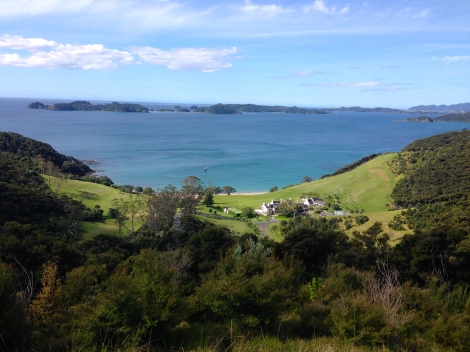 Stars End 2 at anchor in the bay

Frank & I have enjoyed exploring the various islands and bays, sussing out the best places to take my sister Nadia, her husband Dave and son Danny when they fly in to join us for 2 weeks holidays later this month. They are presently in Brisbane enjoying some Australian sunshine and quality time with our father and family.

Much as we would love to have flown back to Brisbane to share Christmas with our children, we have delayed our trip home until later in February when our next grandchild is due, and we plan to stay for a couple of months catching up again with friends and family. 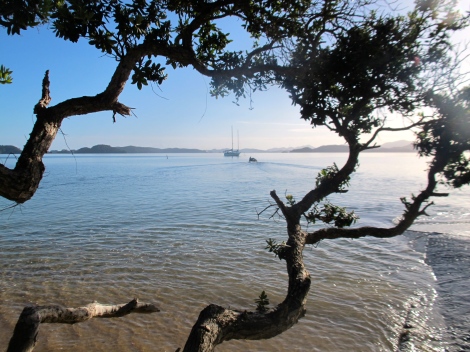 3 responses to “Bay of Islands”