We’ve been in India for one month.
Whilst we were really looking forward to coming, I must say that it has far exceeded all our expectations.

The diversity and richness of the Indian culture, the vibrancy of the colours of the ladies in their stunning saris & punjabi outfits, the decorations and elaborate architecture and the smiling faces & warmth of the people has captured our hearts in this short time.

Yes, Kochin town is teeming with people, motorbikes, tuk-tuks and cars. The noise is deafening with traffic jams & horns honking, but where we are located at Kochi Marina on Bolgatty Island Resort, just a short ferry ride across the water, we enjoy a much quieter, slower pace of life and we are lucky enough to be able to use the pool, bar & restaurant facilities of the resort. 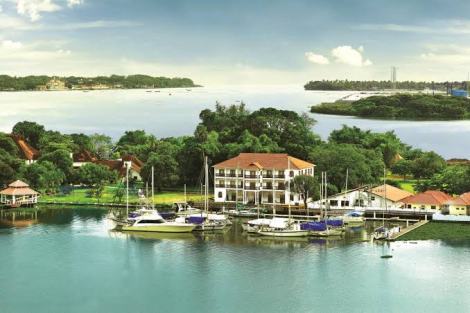 Frank and I spent our first couple of weeks settling into marina life, socialising with friends we have met over the past few years cruising in South East Asia, & other international yachts, most of whom are preparing for the long journey through the Red Sea into the Med before the weather window closes by mid March.

Nazar is a local man who has helps most of us yachties who arrive into Kochi with the tedious job of clearing into the country, ( it can take 1-2 days), and is a fantastic help around the marina, sourcing spare parts and tradesmen, delivering diesel and water or taking us places in his tuk-tuk. He invited us around to his home where we met some of his family and were treated to a delicious lunch. I am looking forward to some cooking lessons from his wife Saweena.

Stars End 2 was one of the last yachts to clear customs in Kochi before new rules were introduced as a result of the coronavirus. Now, all yachts that arrive from Thailand have a quarantine period of 14 days  before they can clear into the country. Since it generally only takes up to 12 days to sail from Thailand this is causing quite a lot of confusion and hassles with yachts arriving who are now forced to anchor off the quarantine area and wait.

So we tidied up the yacht after our passage here, and we removed both of Stars End 2’s sails to avoid the mould that would be inevitable during the heavy monsoonal rainy that start early April. Frank has organised for some engineering work to be done fixing up the anchor winch shaft and having new pulleys made for the davitts.

Good friends Del & Craig have arrived in Kochi on board their catamaran ‘Ohana Uli’ and have hired a car for a month. Craig is one brave and highly skilled driver who doesn’t seem phased coping with the crazy traffic, so we have been spoilt with frequent  lifts.

The vast network of waterways of the Alleppy Backwaters

Along with their crew member, Ben & mother Sari visiting Israel, Frank and I travelled 50kms south of Kochi to the Alleppy backwaters, a vast 900km waterways of inlets and network of canals.
Traffic gridlocks are commonplace on the roads here in India and travelling short distances can take a long time and require much patience. Our trip down to Aleppy, albeit with a hire car and driver, took over 21/2 hours & was stressful. Our return trip, on a Sunday morning, was still busy but only took just over one hour. I found it hard to watch the road, as I gripped the seat in fear and gasped with shock each time cars overtook on the wrong side of the road, and narrowly missed one another or the solid stream of motor cyclists.

We spent three nights on board a houseboat designed like a kettuvallum (traditional rice boat) meandering along the vast network of waterways, and tying up along the shoreline each night. 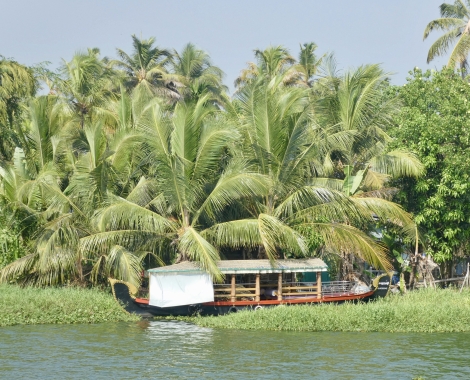 The quality, sizes and prices to hire a houseboat varies, but the crew on board our modest two bedroom boat, captain George, cook Lal and young crew Pame, took great care of us even though they spoke little English.

Sari hopping back onto the houseboat

Lunch stop along the rice paddies 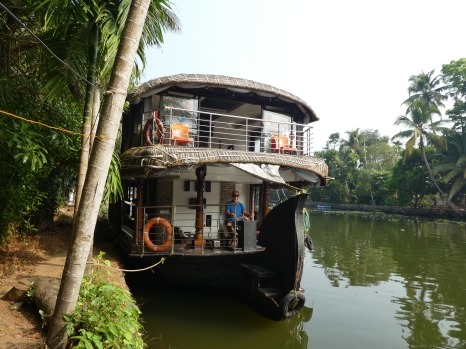 Tied up to the riverbank for the night

We were served delicious Keralan meals and snacks as we wound our way from the busy pick up point where scores of tourist houseboats jostled for space and right of way along the waterways through to the quieter Backwaters. 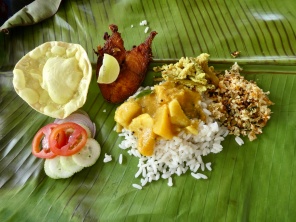 Banana leaf meal. Cook Lal whipped up feasts for us each day on a two burner stove in a tiny galley 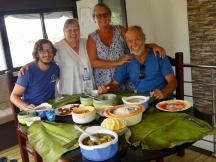 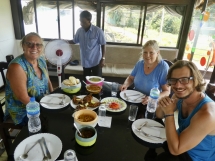 The waterways merge into a network of canals that criss cross vast areas of rice paddies stretching as far as the eye can see. Narrow paths run along these borders between the canals and rice paddies to provide a walking path between homes, small villages, schools, elaborate churches and palm fringed shady shorelines where workers from the rice paddies rested from the searing heat. 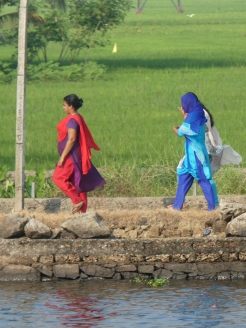 Even walking along the narrow paths, the women’s dress provides dramatic colour against the rice paddies 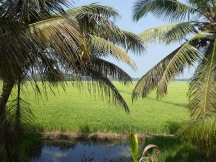 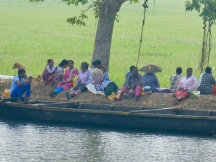 Taking a break from working in the rice paddies

Our time on the houseboat gave us a fascinating glimpse into village life along the Backwaters. 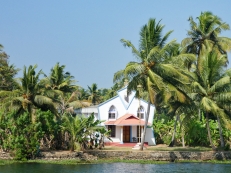 Cleaning her fish for dinner 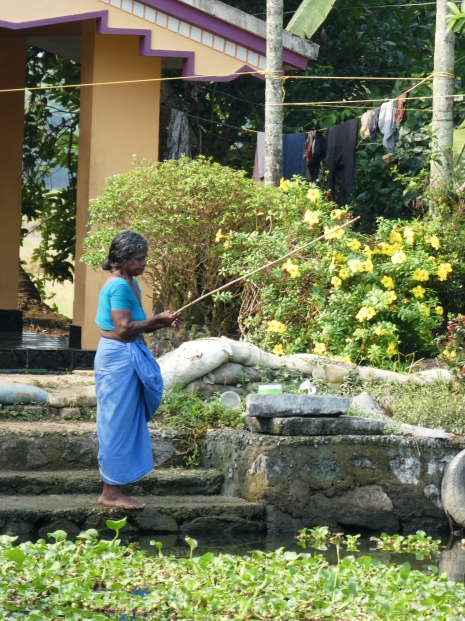 We saw lots of people fishing with simple bamboo rods

We woke to the rigorous slap slap as the women washed and beat their clothes against the stone steps in front of their homes, bordering the shoreline. The inhabitants of the Backwaters washed their dishes, cleaned their vegetables , fished with a simple wooden pole and performed their daily bathing all in the same waters.

This fellow delivered provisions at shops along the waterways 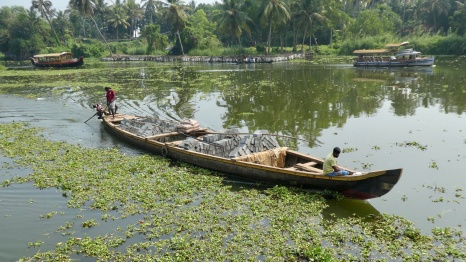 Sturdy wooden canoes paddled back and forth along the banks, ringing bells, or shouting out the wares they had for sale. Large open wooden boats ferried building materials, fresh produce and water to small shops and homes that dotted the river banks.

In many areas, clumps of water hyacinths floated on the water and sometimes it stretched so thickly across the waterways it become a dense field of flowering plants. 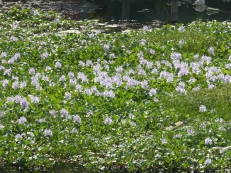 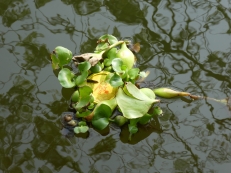 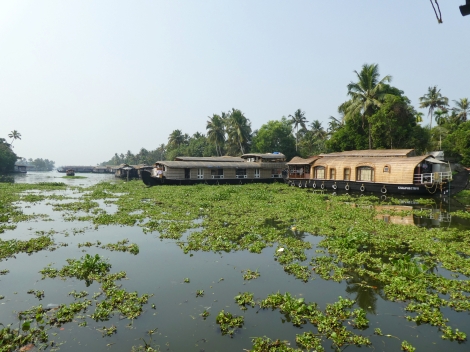 Water hyacinths across the water

Here in particular amongst the rushes, plants & palm trees along the lakes & shoreline there was an abundance of bird life. 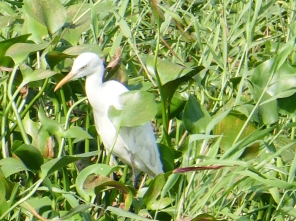 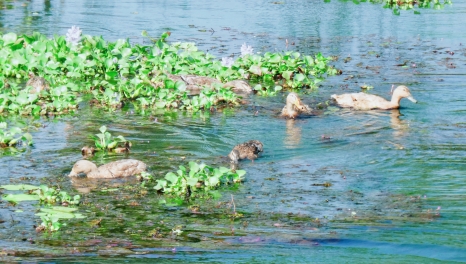 There appeared no shortage of life under the water either. We were interested to watch fisherman use a portable anchor made of a long bamboo pole with a wire mesh bag at the end. They dragged this along the bottom to fill with mud and rocks and create an anchor to which they could tie up their canoe whilst they dived into the shallow waters looking for mussels, which they then hawked as they paddled along the foreshores.

Diving for mussels in the canal

Sorting his catch of mussels

Fishing for mussels in the lake

After our cruise through the Backwaters, we head back to Kochi Marina, where we organised some more jobs on board Stars End 2 and had several farewell gatherings for ​friends leaving for the long passage to the Mediterranean through the Red Sea.

We acquired another portable air conditioner from Kevin & Suzie on board ‘Temptress of Down’ who have departed for the cooler waters of the Med so now life on board is a bit more comfortable here in the stifling heat.

We have had a diver wrap the yacht’s propeller in a thick plastic bag to try and prevent the growth of barnacles and mussels that we saw removed in vast quantities from other boats staying in the Marina over several months.

In a few weeks before the monsoon season begins, most of the yachts here will depart for other destinations. We will be one if just a handful staying here for the year,  but first we are looking forward next week to driving with friends Del and Craig the 755 miles up the coast to the beautiful city of Goa.